(Feb. 4, 2010)   The government of Haiti has added 63 children to the list of adoptees allowed to leave for Canada. All were going through the adoption process before the earthquake.

Added to the previous list of 154, this brings the total number with permission to leave Haiti to 217. Of those, 179 children are already in Canada. The flight summary is below. (Airlines have donated flights to rescue adoptees.)

The adoptees live in orphanages around Haiti, where road access is difficult. Some orphanages were destroyed by the earthquake. As Canadian Embassy staff find children cleared for adoption by the Haitian government they inform the adoptive parents, and take the children to the airport in Port-au-Prince for the next flight to Canada. CIC says most flights will land in Ottawa (not Montreal, as stated by Québec's minister of social services, Lise Thériault).

CIC updates are at "Earthquake in Haiti". The Jan. 27 update says that the government of Haiti has allowed to come to Canada 217 children who were at some point in the adoption process when the earthquake struck—129 would go to Québec, 27 to Alberta, 24 to B.C., 14 to Ontario and the rest to four other provinces.

Here are the flights which have united Haitian children with their adoptive parents in Canada:

CIC said that Canadians adopted 237 Haitian children in the period from January 2008 to September 2009. For the status of adoption in Haiti, see Earthquake halts new adoptions in Haiti. 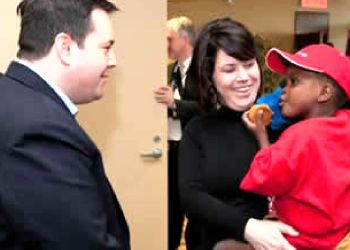 Minister Kenney welcomes Haitian orphans to Canada
(Jan. 24, 2010) On Jan. 24, 2010 24 Haitian orphans stepped off the plane in Ottawa and into a new life in Canada. The first group of Haitian adoptees to reach Canada since the Jan. 12 earthquake flew in a donated Air Canada Airbus A-330 with a volunteer crew.

The return flight to Ottawa carried the orphans, 116 Canadian citizens, most of them of Haitian origin, plus 18 Haitian-Canadian Montreal police on a fact-finding mission and some Canadian embassy staff.

For a list of business donations of humanitarian aid, see "Haiti relief effort gets boost from Canadian businesses".

Aged from 11 months to nine years, the 24 orphans are joining their new families across Canada—15 in Québec, the rest in other provinces. Most were in good health, but a doctor on the flight, Dr. Guy Riendau, said two had to be taken to hospital with fever and gastroenteritis symptoms, according to a Canadian Press report.

The federal government took steps to fast-track adoptions which were already in process before the earthquake. Immigration Minister Jason Kenney said Jan. 22 that 86 children are fully approved for adoption and cleared to come Canada. Of that number, 24 arrived Jan. 24 in Ottawa. "I've directed my officials to issue temporary resident permits, which is an extraordinary measure, to allow these children to enter Canada as quickly as possible," Kenney said.

Haiti is dealing with 154 adoption applications from Canada. On Jan. 22, 2010 Minister Kenney announced an agreement with the Haitian government. Canadian officials had presented a list of the 154 cases currently in the adoption process; Haitian official agreed to allow up to 154 adopted children to fly to Canada. 86 cases were sufficiently well advanced in the adoption process that the children could leave immediately. The remaining 68 cases at earlier stages would need to pass a number of steps before the children could be brought to Canada. "We are working with provincial and territorial governments, and child welfare agencies to expedite the process," he said.

Within the 86 cases the first group of 24 children arrived Jan. 24. As for the rest of the 86 cases, Citizenship and Immigration Canada (CIC) is working to get those adopted children out of Haiti on upcoming flights using Canadian Forces and commercial aircraft landing in Montreal.

Québec's minister of social services Lise Thériault said Jan. 22 that Québec will oversee the arrival of all the children, no matter what region of Canada they are headed to. Those in need of medical care would be taken to Montreal's Sainte-Justine hospital. Given the special circumstances, many children arriving in Montreal will not have final confirmation of their adoption from Haitian authorities, Thériault said.

Of the outstanding 154 applications, 103 come from families in Quebec. (In 2007 Canada welcomed 89 adoptees from Haiti—45 of them went to Québec.)

CIC is advising parents when their children are brought to the Canadian Embassy compound in Port-Au-Prince and are issued their documents, and when they are confirmed to fly on a specific flight to Canada.

ORPHANS FIND NEW HOMES
U.S. -- 53 children rescued from the damaged Bresma Orphanage in Port-au-Prince arrived in Pittsburgh on Jan. 19, 2010, to stay in foster homes until adoptions finalized. Adoption cases are under way for 47: 40 for U.S. adoptions, 4 for Spain, 3 for Canada. The State Department said it's working on nearly 300 cases of Americans adopting Haitian children; 200 of those cases are being accelerated.
France said Jan. 20 that it will immediately take in 276 Haitian children who have already been matched with French parents. In all 904 French families have applied to adopt from Haiti.
Netherlands -- 123 adopted Haitian children reached Eindhoven on Jan. 21.
Canada -- 217 Haitian orphans are cleared to fly from Haiti to their adoptive parents in Canada. 179 have arrived in Canada.
________________________________________
You may reproduce this item with the credit:
"From Family Helper, www.familyhelper.net"