Ontario public adoptions drop every year, or do they? CAS numbers are contradictory

(Aug. 16, 2010)    A report to the Hague Conference on Private International Law shows that Ontario public adoptions are in serious decline.

In contrast, the annual report of the Ontario Ministry of Children and Youth Services credits the ministry with an "increase in adoptions", despite the fact that its own statistics show public adoptions not growing at all, but flat or heading down.

What is the true state of affairs? Here are three charts reporting how many children in state care are being placed for adoption by Ontario's Children's Aid Societies (CASs). 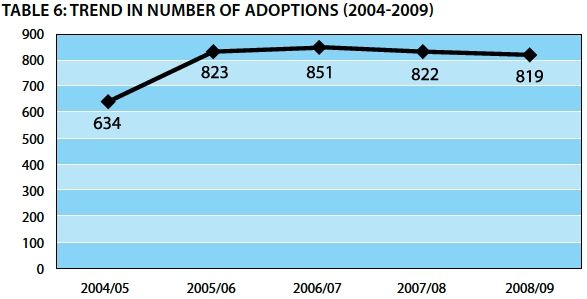 Why don't the three sources have identical numbers? In part because of differences in time periods (fiscal vs. calendar year) and reporting delays (time to receive and process court order data). An additional, and unknown, reason must account for the markedly different numbers in the third chart.

The first two may be read as "stable" or "in slow decline". The third, as reported to the Hague Conference, shows a marked drop in CAS adoptions completed in Ontario—peaking in 2006 at 865 and dropping to a record low in 2009 of 622.

In apparent contradiction to these statistics, the Ministry's Results-based Plan Briefing Book 2010-11 says one of the ministry's "Key Results" is an "Increase in adoptions".

In no way can these figures be called an "increase".

In addition, I wonder why the first two charts don't show the decline reported in the third. Differences in reporting standards should smooth out over four years and at least show the general trend.

While it's hard to say which chart portrays reality, it is clear that adoptions of Ontario children in care have not been on the "increase", as the ministry claims.

Although the ministry's lack of clarity is a concern, there remains the larger issue: is the ministry doing its job?

The ministry is supposed to protect abused or neglected children, provide for children in care, and place Ontario Crown wards for adoption. (The ministry delegates its mandate to 53 Children's Aid Societies (CASs) across the province.)

OACAS statistics say 17,876 children were in care of Ontario's CASs at Mar. 31, 2009. Of those, about 9,200 are permanent wards, usually shuttled between foster homes, who need permanent, loving families.

Yet only 620 to 820 a year (depending on your source) actually find an adoptive home. Meanwhile many Canadians go abroad to complete their families.

Across the whole of Canada, an estimated 30,000 children languish in foster care.