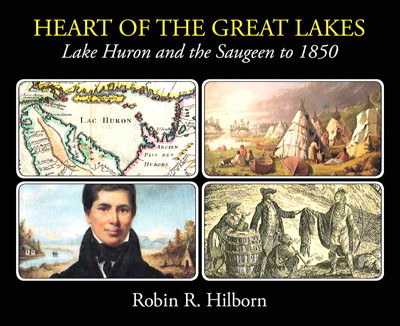 On Nov. 21, 2015 the Bruce County Museum and Cultural Centre hosted the launch of a book which was five years in the making.

Titled Heart of the Great Lakes: Lake Huron and the Saugeen to 1850, the book covers the time before Southampton was founded: how mapmakers defined the shape of Lake Huron, how Métis fur traders fought the Hudson's Bay Company at the mouth of the Saugeen, how the Saugeen Ojibway welcomed Methodist missionaries and how they struggled with commercial fisherman at the Fishing Islands.

It's a follow-up book for Southampton author Robin Hilborn, who published the local history Southampton Vignettes in 2010. The book launch and talk took place on Sat. Nov. 21 at 2:00 p.m. at the Bruce County Museum and Cultural Centre, 33 Victoria St. N., Southampton ON.

Hilborn said he is happy he has finally finished it. "It's personally satisfying, not only to see the culmination of five years' work, but also because I think I've made a real contribution to local history." The second part of the book, on the fur trade, describes the nine posts of the Hudson's Bay Company on Lake Huron and the competition of the HBC's Saugeen post with the "lone-wolf" free traders from Goderich.

After telling the story of the fur traders, missionaries and fishermen, Hilborn said he "had to conclude that, while we appreciate the efforts of our ancestors, 150 years ago, in carving homesteads out of the forests of the Queen's Bush, the cost was dear. As settlers cleared land for farms, habitats disappeared for beaver and deer. The trees of the Bruce Peninsula fell to the lumber companies. Commercial fishing at the Fishing Islands destroyed the fish stocks. And the Ojibway, who had managed these resources for centuries, found their land and resources largely gone, with precious little recompense."

Hilborn said the most fun was unearthing the untold story of Alexander McGregor of Goderich, who started commercial exploitation of the Fishing Islands fishery in 1831 and managed to acquire four wives.

Interestingly, the Dictionary of Canadian Biography qualifies Alexander McGregor as "a respected trader and fisherman". In fact, as Hilborn told it, in the 1830s McGregor squatted on Ojibway land, illegally fished in Ojibway waters and sold whiskey to the Ojibway, all the while ignoring government warnings that he was breaking the law. He left his wife in Goderich and took three Ojibway wives, each one the daughter of a chief.

Hilborn said he wondered if the DCB would accept a revised description of McGregor: "squatter, poacher and polygamist".

Heart of the Great Lakes is 214 pages and $40, from the Bruce County Museum gift shop in Southampton, Ont., or from Robin Hilborn at www.familyhelper.net/huron. The hardcover book includes an index and a bibliography of 230 entries.

To order Heart of the Great Lakes, print (or copy out) the form below, fill in and mail with your cheque to:

• Price in Canada is in Can$.   For U.S. addresses, in US$.
• We accept cheques but not credit cards (no need to reveal your card number).
• No tax ... Family Helper Publishing is tax-exempt.
• Queries: helper@familyhelper.net.

HOW TO ORDER
CONTENTS
READ THE PREFACE
ABOUT THE BOOK