What is adoption all about? When a student asks this, will you have an answer? We present here some basic information on adoption for the elementary and secondary school teacher. While the focus is on the adopted child, we have tried to include the perspective of children of other non-traditional families.

We hope you find this guide useful in your classroom. Give a copy to your principal. Suggest the school board make it a resource for teaching adoption in schools. The students’ questions are sure to come.

Many ways to make a family

Kids today grow up in all sorts of family situations. Which of these describes the children in your class?

• A child living with mom and dad (parents by birth) ... the traditional family.

• A child raised by grandparents.

• A child of a single parent.

• A child of separated or divorced parents, living with one parent. If the parent remarries or enters a new relationship, the child gains a stepmother or stepfather.

• A foster child, with both foster parents and biological parents. Foster children who are moved from one foster home to another (very common) have had a series of foster parents.

• An adopted child has two sets of parents: biological parents and adoptive parents. The child often knows her birth parents and has contact with them (but some may not). Children adopted from abroad know little of their roots. Some older adoptees (especially teens) who never knew their birth parents seek to find them and know more about themselves, their birth family and, in transcultural adoptions, their birth culture.

• A child of a same-sex couple has two mothers or two fathers. The child may call his parents by names which suit him, such as “dad” and “papa”. One of the couple may be the biological parent—the child may result from donor insemination or from a previous relationship with a biological parent, who may or may not be in the picture. Alternatively, one of the couple, or both, may have adopted the child. Thus a child may have, for example, three mothers: a birth mother and two co-parenting adoptive mothers.

The days of the traditional nuclear family are long gone. You can no longer rely on lesson plans based on mom-dad-and-two-kids. You need to allow for non-traditional families.

In fact, any class assignment which ignores the variety in families today does real harm to students who don’t fit the traditional pattern and as a result feel out of place, even excluded, in class discussions.

Luckily you can modify ill-thought-out assignments to make them more inclusive. They can be adapted and broadened to include children from non-traditional families. It’s a road toward tolerance and understanding of all family forms. 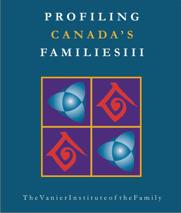 It’s a seemingly simple question: “What is family?” A few decades ago, most Canadians would have answered something along the lines of: “A married man and woman with at least one child.”

Today, with so many more visible forms of family—from single-parent and blended to same-sex and even no-sex—characterizing society’s basic unit is a much thornier proposition at a time when just four in 10 families fit the traditional nuclear mould.

In a revealing new portrait of Canada’s families, Profiling Canada’s Families III, the Ottawa-based Vanier Institute of the Family says: “Families are so important, so vital and so varied, that it seems that no one definition can capture their true significance.”

So what is family? Is it people related by blood or marriage? A man and woman who have at least one child? Those who share a roof? Adults who share a bed? What about two sisters who live together?

”If you feel like a family, you probably are a family,” says the Vanier report, a compendium of information based largely on research and data from Statistics Canada and other agencies.

Even Statscan struggles with the issue and uses two definitions—census families and economic families—which have changed over time.

The Vanier report notes that Canadians’ views have changed greatly on what constitutes family. A 1983 survey found 42% of respondents felt “the father must be master in his own house.” By 1992, only 26% agreed with the statement. And in 2000, just 18% concurred.

The Vanier report finds families to be varied and ever-changing. Fewer couples—especially young Canadians—are walking down the aisle, both brides and grooms are older, many couples are breaking up, women are having children later, families are a stable average of 3.1 people, children are staying home longer, there are more stepfamilies, dual incomes are the norm and religious affiliation is declining.

What is a family?

The Vanier Institute of the Family takes a broad view of families. It defines a family as any combination of two or more people who are bound together over time by ties of mutual consent, birth and/or adoption or placement and who, together, assume responsibilities for combinations of some of the following:

Addition of new members through procreation or adoption

On Aug. 22, 2005 the California Supreme Court ruled in three same-sex parent cases that a child may legally have two mothers. In Elisa B. v. Superior Court, it held that a lesbian who had agreed to raise the children born to her partner, but who then split up with her partner, was required to pay child support as a parent. In K.M. v. E.G., the court said that a written waiver of rights did not prevent a lesbian woman who had donated eggs to her partner for in vitro fertilization from asserting rights as a parent. In Kristine H. v. Lisa R., it found that a stipulation signed by the birth mother conferred a legal right to her lesbian partner to exercise the role of parent.

Black Jack, Missouri is a suburb of St. Louis. The city council voted Aug. 15, 2006 to change the definition of “family”. A city bylaw had prohibited over three people from living together unless related by “blood, marriage or adoption.” Now the city will grant a housing permit to an unmarried couple with children so they can live in a house they bought there. Black Jack now includes unrelated people and their children, living together as a single housekeeping unit, in its definition of a family.

An Ontario boy can have a legal father and two legal mothers, the Ontario Court of Appeal ruled on Jan. 2, 2007. Canada’s first official three-parent family includes a biological father, a biological mother and her lesbian partner.

ONE—Many ways to make a family
TWO—Many ways to create a child
THREE—Biased class assignments ... and how to fix them
FOUR—Teaching the language of adoption
FIVE—How to introduce adoption in elementary school
SIX—Answers for the pregnant student
SEVEN—A suggested classroom presentation
EIGHT—Research points the way
NINE—Adoption resources for teachers and students
TEN—Glossary: the ABCs of adoption
________________________________________
"Teacher's Guide to Adoption" by Robin Hilborn was published in print in Family Helper 45, "Adoption Goes to School", 2004, and online since Jan. 5, 2005.